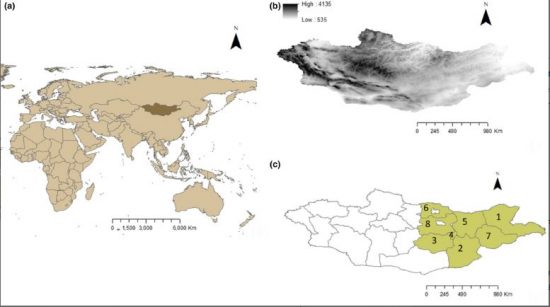 Mieghan Bruce, Jonathan Rushton, and Nicholas A. Lyons of the Global Burden of Animal Diseases programme have collaborated with Georgina Limon (Pirbright Institute) and Gerelmaa Ulziibat (State Central Veterinary Laboratory) to produce the now published article Socio-economic impact of Food-and-Mouth outbreaks and control measures: An analysis of Mongolian outbreaks in 2017.

Abstract
Mongolia is a large landlocked country in Central Asia and has one of the highest per capita livestock ratios in the world. During 2017, reported foot‐and‐mouth disease (FMD) outbreaks in Mongolia increased considerably, prompting widespread disease control measures. This study estimates the socio‐economic impact of FMD and subsequent control measures on Mongolian herders. The analysis encompassed quantification of the impact on subsistence farmers’ livelihoods and food security and estimation of the national‐level gross losses due to reaction and expenditure during 2017. Data were collected from 112 herders across eight provinces that reported disease. Seventy of these herders had cases of FMD, while 42 did not have FMD in their animals but were within quarantine zones. Overall, 86/112 herders reported not drinking milk for a period of time and 38/112 reduced their meat consumption. Furthermore, 55 herders (49.1%) had to borrow money to buy food, medicines and/or pay bills or bank loans. Among herders with FMD cases, the median attack rate was 31.7%, 3.8% and 0.59% in cattle, sheep and goats, respectively, with important differences across provinces. Herders with clinical cases before the winter had higher odds of reporting a reduction in their meat consumption. National‐level gross losses due to FMD in 2017 were estimated using government data. The estimate of gross economic loss was 18.4 billion Mongolian‐tugriks (US$7.35 million) which equates to approximately 0.65% of the Mongolian GDP. The FMD outbreaks combined with current control measures have negatively impacted herders’ livelihoods (including herders with and without cases of FMD) which are likely to reduce stakeholder advocacy. Possible strategies that could be employed to ameliorate the negative effects of the current control policy were identified. The findings and approach are relevant to other FMD endemic regions aiming to control the disease.

This article is available on the Wiley Online Library https://onlinelibrary.wiley.com/doi/10.1111/tbed.13547