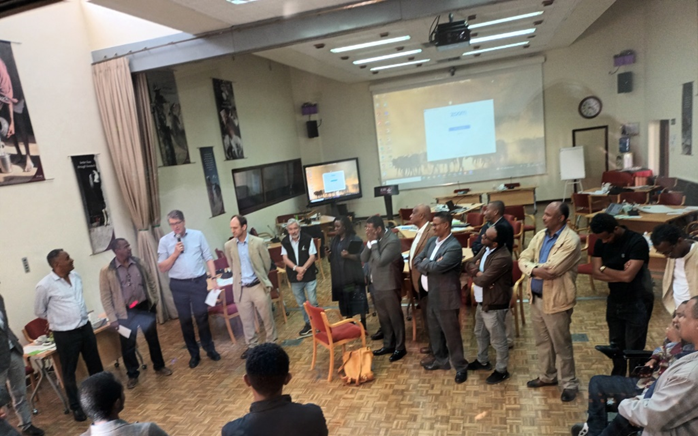 The GBADs Ethiopia case study stakeholder workshop was conducted on November 2, 2022, at the International Livestock Research Institute (ILRI) campus, Addis Ababa, Ethiopia. The GBADs Ethiopia case study was launched in 2021 as proof of concept of GBADs frameworks and methods in estimating the burden of animal diseases. The main objectives of the workshop were to present and review GBADs estimates of animal disease burdens in Ethiopia that has been developed over the last two years and to explore and prioritise possible follow up work of value to national stakeholders. Stakeholders from various government agencies, private sector, nongovernmental organisations, and academic institutions participated in the workshop. The workshop was officially opened by the World Organisation for Animal Health (WOAH) representative for East Africa, Dr. Sam Wakhusama and the executive lead of Ethiopian veterinary services, Dr. Wubshet Zewde. The workshop objectives and agenda were introduced by GBADs’ Ethiopia case study lead, Dr Theo Knight-Jones (ILRI), followed by a brief introductory overview of the GBADs programme by the programmes director Prof. Jonathan Rushton (University of Liverpool).

In the morning session, results of disease burden and attribution analysis, animal health economics trainings and coaching, and the GBADs dashboards were presented and discussed. Firstly, the small ruminant biomass and economic values, and animal health loss envelope (disease burden) estimates were presented. Next, the methods and preliminary analysis of the animal health loss envelopes for cattle and chicken were presented, with comparison of the estimates across different species and livestock systems. This was followed by a presentation of the GBADs disease attribution framework with results of high-level attribution of the small ruminant, cattle and poultry animal health envelope as examples. The salient issues raised by the workshop participants were who and how will the information generated be used and that further analysis at the sub national level and for specific disease estimates would be a useful next step as animal health budgets are distributed at sub-national level.

The report on animal health economics training and coaching, which was provided for staff of various government agencies, was presented and the training participants reflected on how they have used the knowledge and skill they gained from the training in their work. The training was commended as useful and suggested to be strengthened and continued with delivery at the regional level.

The GBADs Dashboards, which were developed by the GBADs Informatics theme and First Analytics, using different aspects of the Ethiopia case study data and analysis, were presented feedback sought from the participants. The participants valued the data visualisations and ability to explore different scenarios and the economic impacts of these and forwarded ideas that could be included in the dashboards in future.

The afternoon session was dedicated to understanding how GBADs results can be further developed for the benefit of Ethiopian stakeholders . Findings from stakeholder interviews on the utility of GBADs conducted prior or the workshop was presented by Dr Wondwosen Asfaw (GBADS Ethiopia case study engagement consultant). Discussion was made on main points extracted from this report which include; from the private sector perspective, what are the expectations and needs in terms of disease burden evidence to be generated by GBADs? What capacity building and technical support related to animal health economics can GBADs contribute to the Ministry of Agriculture (MoA)? What type of disease burden evidence/information and in what form MoA wants from GBADs? How to support and enable the integration of GBADs activities with the national veterinary service system and other MoA activities? Further open discussion was made on the need for the type of information for advocacy, decision making and evaluation, need for capacity building, and level and type disaggregated analyses needed.

The main conclusions reached in the workshop were: GBADs estimates, and dashboard are useful and can be used by relevant government agencies for decision making, advocacy and evaluation of decisions, and the capacity building training on animal health economics are important and should be expanded and continued. To further enhance GBADs results and products the following recommendations were forwarded: