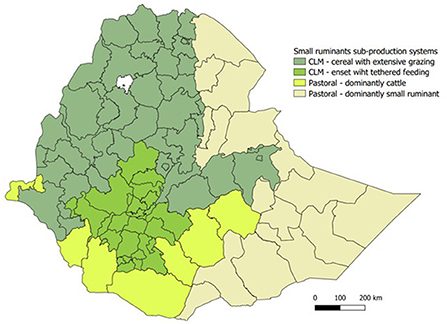 Wudu Temsegen Jemberu, Yin Li, Wondwosen Asfaw, Dianne Mayberry, Peggy Schrobback, Jonathan Rushton and Theo Knight-Jones have had the following publication published. You can find the introduction below and the full version can be found here

Ethiopia has one of the largest populations of small ruminants (42.9 million sheep and 52.5 million goats) in the world (1). Based on livestock population statistics available in FAOSTAT, this accounts for around 10% of Africa’s and 4% of the world’s small ruminant population (2). Yet, these animals and the systems they are kept in are poorly studied.

Small ruminants play an important role in food security for livestock keeping households (3), with small ruminant ownership ranging from 11 to 60% of households in the highland mixed agriculture regions and 41–95 % in lowland pastoral regions of the country (4, 5). The popularity of small ruminants reflects their many benefits: they require low capital investment, and have short breeding cycles and fattening times, and can produce multiple offspring each year. This provides a faster return on investment compared to cattle, can assist with short term cash flows, and helps flocks recover from drought quickly. Small ruminants make up about 25% of the value of meat produced in Ethiopia (6). They also provide significant contributions to the national economy by contributing to export trade. For example, in 2018/19 small ruminants made up about 86% of the USD 93 million meat export revenue and about 8% of USD 45 million live animal export revenue of the country (7).

Despite a large population, small ruminant production in Ethiopia is largely based on traditional subsistence production with limited commercialization and modernization. Both production offtake rates and production quantities are very low (6). Reproduction rates are also low with long age to maturity, long lambing/kidding intervals, and very high young stock mortality (6, 8).

Technical analysis of problems in existing production systems and potential interventions such as feed, genetics and health are needed to bring sustainable improvements in the sector. This requires an understanding of the systems, including its population structure, biomass, production, and economic value. However, this understanding is limited in the small ruminant livestock sector in Ethiopia.

The Global Burden of Animal Diseases (GBADs)1, (9) is a research programme which aims to estimate the burden of animal diseases by livestock sectors and production systems to support rational decisions with regard to animal health and production interventions. This paper presents estimates on the scale, distribution, economic value, and trends of the small ruminant sector in Ethiopia to be used as foundation for animal disease burden estimation. The results include important findings relevant to livestock policy in the sector.